Wexéwxi Pu’éska, commonly known as Pu’éska Mountain, is one of the most sacred places in the Luiseño religion. Pu’éska is the place of many significant events during the Creation of the World. Its name translates to “where the rocks cry” in English because it was here that the rocks wept after Wuyóot, the Káamalam’s first leader, died; however, Pu’éska is more than just the site of the weeping rocks.

At Pu’éska Mountain we can see the form of Tamáayawut where she lay down to await the birth of the Káamalam. Some of the stones on and around Pu’éska show proof that the Káamalam were there. Knowledge of Pu’éska’s many important places, such as ‘éxva Teméeku and Naxá’chish, have been passed from elder to child for generations, and we will continue to do so far into the future.

In 2007, Granite Construction met with Pechanga leaders regarding Granite’s proposal for Liberty Quarry. The quarry, in the form of an invasive pit mine, was to be located on Wexéwxi Pu’éska, and if it had been completed, it would have destroyed the mountain, leaving a huge hole in its heart. Losing Pu’éska Mountain would have been devastating to our people because it would have stripped her of her cultural significance and physical beauty.

Between 2008 and 2012, we collaborated with the City of Temecula, Save Our Southwest (SOS) Hills, and other community organizations in the Temecula Valley to fight against the proposed quarry. The County denied granite Construction’s application twice before agreeing to “fast-track” in 2012. To end the long-running battle, we purchased Pu’éska Mountain in November 2012, and in 2015, the land was put into trust by the federal government. This acquisition not only saved the mountain but also prevented the air pollution the quarry would have caused.

In recognition of our commitment to protect Wexéwxi Pu’éska and our community, Temecula city leaders made November 15 an annual city holiday called Pechanga Pu’éska Mountain Day. 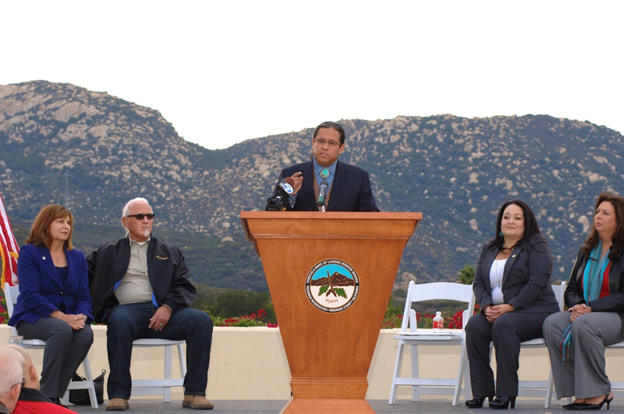 Pechanga Tribal Chairman and Tribal Council Members announcing the purchase of Pu’éska Mountain to the public in November 2012. Wexéwxi Pu’éska can be seen in the background.