Pechanga’s culture and traditions are strongly influenced by the religion of our ancestors. We believe that the world began here in the Temecula Valley with the birth of the Káamalam (First People) at ‘Éxva Teméeku. The choices the Káamalam made changed the world in ways that still affect us today, and the stories about the Káamalam have guided the Pechanga people and their ancestors for countless generations.

The world began in Temecula. Kíwvish ‘atáxvish was the only being. Then Kíwvish ‘atáxvish made Túukumit (the Sky) and Tamáayawut (the Earth). Tamáayawut became the mother of all things. She gave birth to the Káamalam (First People). For food, they ate tóovish (white clay). The Káamalam made their home at a place called ‘Éxva Teméeku, the place now known as Temecula. 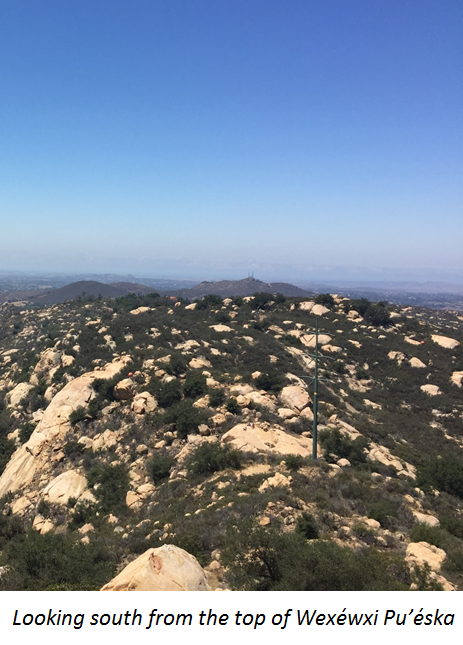 While the Káamalam were living at Teméeku, there was a man, Wuyóot, who was very wise. Wuyóot especially admired a beautiful woman named Waxáawut (Frog), but once he saw that her back was hollow and bony like that of a frog, his admiration quickly turned to disgust. Waxáawut read his thoughts and wanted revenge. She and her companions cursed him, and he fell sick. No one could cure Wuyóot, and he died at ‘Iténgvu Wumówmu (Elsinore Hot Springs).

Wuyóot was cremated on Pu’éska Mountain, and after his ashes were buried, the first oak tree grew from them. Three days later, Wuyóot rose in the sky in the shape of Móyla (the Moon) as a promise that he would always be with his people. After Wuyóot’s death, there was no longer tóovish to eat, but Wuyóot had instructed the people to grind acorns from the oak tree for food. The Káamalam also decided that some of the plants and animals would become food for the others. This is how the animals, plants, and the entire world came to be.

The Pechanga tribe is committed to preserving and practicing ‘atáaxum customs and traditions which have been passed from parents to children for millennia. These practices allow us to understand our relationships with our ancestors, our ancestral lands, and the communities in which we now live. To this end, we established the Pechanga Cultural Resources Center (PCRC). The PCRC is dedicated to preserving and teaching about all aspects of traditional life. Under the guidance of our dedicated Cultural Committee, the PCRC promotes Pechanga culture and history through language and culture classes, tours, exhibits, and community outreach activities.

Thanks to the economic support from Pechanga business enterprises, we are strengthening our traditions and ensuring the vitality of our culture for generations to come. Inside our culture are the stories, lessons and worldviews that make us unique. At Pechanga, we share our stories and our vision for the future among one another by preserving and using our native language. Our ethnobotanical practice takes root in our nursery. Cultural artifacts are on display in the Cultural Center and the Government Center, and our traditional skills and knowledge are practiced and shared by tribal members at our outdoor native village complex.